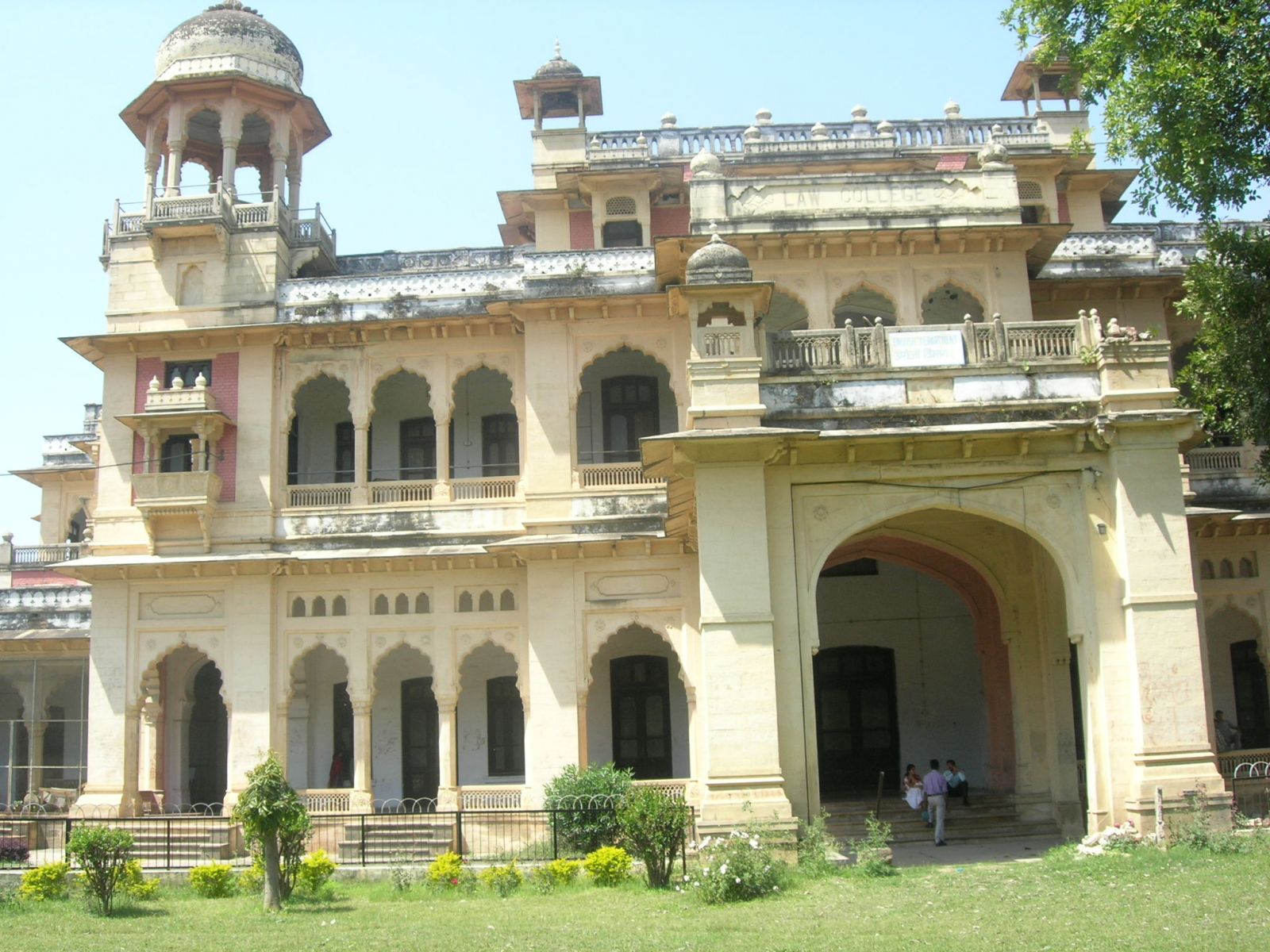 The Department of English and Modern European languages, University of Allahabad, has a unique distinction of being one of the oldest English Departments in the country. Established in 1922, it was part of the British plan of westernizing the natives of the land through education, “the white man's burden”. As part of that colonial legacy, we still have the S.G Dunn (our first British Head of the Department) memorial gold medal for the undergraduate topper in English. This historical truth and inheritance always gave the Department an elitist character. We have had our share of brown sahibs walking the portals of the grand Edwardian Mughal structure (with Rajasthani artefacts) that houses us till date. There were great teachers in this Department who in their own style carried the mantles of Oxford dons that they reflected in the then “Oxford of the East” of which the English Department could be called the truest representative. But right from the beginning the nativist assertions were strong in the Department and out of the creative conflict between the British origins and the nativist challenge there emerged a class of teachers, writers and researchers who tried to blend the two worlds. We have thus had faculty who taught English but wrote in Hindi and Urdu and have already achieved legendary status. With changing times and reality a department has to adapt itself. But a Department that has such a rich past finds it very difficult to get out of its outdated mould. Even then we have slowly changed with the times and can boast of certain features which are unique. This is a Department with a faculty rich in creative writers, researchers, teachers and theatre workers who are negotiating (in individual and private levels) between the region, the nation and the world. We have poets, writers of fiction, directors of plays, scholars who have received prestigious Fellowships (national and international), and great teachers continuing the age old tradition of a grand teaching Department. Our only weakness is that in our quest for individual excellence we have neglected our functioning as a team, and overburdened with the weight of our past grandeur we are lagging behind in the race for which some of the new universities (who are not burdened by this handicap) have set a break neck speed. But surely and steadily we are moving to meet this challenge and I will conclude by listing areas in which we have the expertise to achieve excellence. Translation Studies, Creative Writing, Cross Cultural Studies, Post Colonial Studies, Women's studies, Comparative Literature, Theatre, Music are some of the areas where we possess tremendous potential. And this is because of our unique historical position, balanced as we are so delicately between our rich Colonial past (which none of the new Universities can claim) and the hard core native reality of East Uttar Pradesh.

The Department has a rich tradition, a glorious past and a glorious present. In the past a galaxy of distinguished scholars served on the faculty of the Department. One can mention Prof. Amaranatha Jha, Prof. S.C. Deb and Prof. P.E. Dustoor among the scholars, and Shri Firaq Gorakhpuri, Dr. Harivansh Rai Bachchan and Prof. V.D.N. Sahi among the creative writers. Prof. Jha was not only a scholar of English, Hindi, Sanskrit and Urdu literatures but also a great patron of art and culture. Prof. Deb was twice elected President of the all India English Teachers Conference and represented India and Asia at the International Association of University Professors of English at Paris (1953) and Cambridge (1956). Prof. Dustoor was a renowned teacher who subsequently joined the University of Delhi as Professor and Head of the English Department. A of couple teachers in this Department were known primarily for the quality of their teaching. Prof. K.K. Mehrotra and Prof. Y. Sahai fall in this category.

The past has also passed on to the present another legacy which is in the area of literatures other than English. In the past Prof. Jha was the only faculty member who did substantial writing in English, although he also wrote extensively in Hindi and Sanskrit and about Urdu and Maithili literatures. Shri Raghupati Sahai 'Firaq', a leading Urdu poet and recipient of Gyanpeeth award, taught in the Department for about thirty years. Dr. Harivansh Rai Bachchan, a famous Hindi poet, who took his doctorate from Cambridge on the poetry of W.B. Yeats, was on the faculty of the Department for nearly two decades. Prof. V.D.N. Sahi, a well-known modern Hindi poet, taught in the Department till he died in harness in 1982. Prof. P.C. Gupta and Prof. J.K. Mishra have made substantial contributions to Hindi and Maithili scholarship and criticism respectively.

Right now we are a department heavily loaded with creative talents, sharp critical focus, and a host of dedicated teachers and researchers. Some are individually engaged in translation projects, comparative cultural studies, feminist issues etc. A significant development of the Department during the last two decades is the creative writing in English as against the creative writing in Indian languages by teachers in the past. Some of our writers today have left a decisive impact on the current literary scene in India. Prof. Arvind Krishna Mehrotra is an established Indian Poet writing in English and has made as name for himself in translation work. Prof Deepika Srivasatava, Dr. Smita Agarwal, Dr. Sonjoy Dutta-roy, and Dr. Susheel Sharma are younger poets who have started making their presence felt through their publications. Prof. A.N. Dwivedi and Prof. S.C. Dubey have been able to creatively use not just English but also Hindi. Dr. Neelum Saran Gour has made a name for herself in fiction by publishing four books with Penguin (India), Dr. Arindam Chatterji's collection of short stories has been published by Harper-Collins; Prof. L.R. Sharma has published a novel (Penguin) and a short story collection. Dr. M. Prasad has published a collection of short stories. Prof. K.G. Srivastava has successfully translated into Hindi works of Sophocles (Greek), Kalidas (Sanskrit) and Keats (English) and has completed a U.G.C.-sponsored encyclopedia of Comparative poetics. In theatre Mr. Sachin Tewari's Campus Theatre is an established name both at the local and national level. Dr. S.D. Roy, Mr. Aninda Chatterjee, Jaya Kapoor and Raju Parghi have also engaged themselves in the theatre at the local level, through the Natyaroop, the Theatre Ensemble etc.

Prof. Rajnath a Ph.D. from Leeds is a well-known figure in literary theory and criticism. He edited a journal which had both a national and an international standing and a special number of which had been published in book form by Macmillan, London. Prof. M.M. Das had been invited twice to the U.K. to lecture on Hardy and had received the best teacher's award from the University of Allahabad. Prof. L.R. Sharma has published a number of scholarly books one of which is written in collaboration with Mrs. Bandana Sharma. Prof. A.N. Dwivedi, Prof. S.C. Dubey and Dr. M. Prasad have published extensively on Indian writing in English. Dr. Sumita Parmar has specialized in Women's studies and is currently the Director of Women's Studies Centre and Dr. R.K. Singh in British and American fiction. Dr. Sumita Roy holds a Ph.D. from Glasgow. Our youngest faculty, two Lecturers recently recruited, are a rich addition to the Department. Dr. Jaya Kapoor has returned to her alma mater and Raju Parghi, a U.G.C.-Net has come from Pondicherry. Dr. Sarvjit Mukerjee returned to Allahabad after working as a Lecturer at Lucknow University for several years. Dr. Indrani Mukerjee was a J.R.F., S.R.F. and R.A. Dr. Gunjan Sushil was a J.R.F. and S.R.F. and Miss Shruti Pant a J.R.F. and S.R.F. at J.N.U. before jointing the Department.

The Department offers English Literature and English Language at the undergraduate level apart from Post Graduation in English Literature. It has already re-structured the undergraduate syllabus and is currently engaged in revising the postgraduate syllabus. Keeping the tradition on, the Department has recently edited six anthologies for undergraduate students, which have been published by Oxford University Press, Macmillan and Orient Blackswan. We are currently working on the seventh. The Dept. has organized some Refresher Courses in English under the aegis of U.G.C. Academic Staff College and also organizes National and International Seminars to keep pace with the latest developments in the field and to train their students. The Department also teaches Certificate and Diploma Courses in French, German, and Russian.