The National Cadet Corps (NCC) is a youth development movement. It provides opportunities to the youth of the country for their all-round development with a sense of duty, commitment, dedication, discipline and moral values so that they become able leaders and useful citizens.

NCC UNITS OF UNIVERSITY OF ALLAHABAD

To give opportunity to the students, University of Allahabad has opened 4 NCC units. With the view to give opportunity to more girls for opting NCC, University of Allahabad has opened 6 UP Girls Bn NCC exclusively for girls’ cadet in June 2016. A group of 17 students became a part of this organization under the supervision of Associate NCC Officer Lt. Dr. Neetu Mishra in August 2016. From 2016 to 2020 number of enrolled students rose from 17 to 53 (Currently, 20 Cdts in first year, 11 in Second year and 22 in third year).

The Cadets in NCC are the students from graduation and postgraduation of various faculties as Arts, Commerce, Science and Law.

The classes of NCC have been organized between September to January on Friday, Saturday and Sunday of every week.

Thereby, NCC has made a revolutionary change in the lives of Cadets specially the Girl cadets.

Cadets of different units have participated in several training and social activities from April 2019 to March 2020, details of which are given as under.

Chingari se Chirag is an initiative taken by Brig. Brijesh Pandey for the all-round development of the cadets. 6 UP (G) BN & 1 UP Naval NCC in collaboration with the Medical College Allahabad conducted a program in Chandra Shekhar Azad park with a purpose of creating awareness regarding Self Health Care. The cadets were addressed by the experienced Doctors regarding the Healthcare problems and their solutions. A nukkad natak was conducted by the cadets regarding the same. Various life saving techniques were told about and demonstrated to the cadets like CPR. Cadets were also told about importance of Yoga and several helpful exercises too.

INNOVATIVE METHODS OF TEACHING AND LEARNING

A Seminar on multimedia training content and standard teaching module assessment was conducted by 15 UP BN NCC in the campus of University of Allahabad (FCI Building) in the presence of Brig. Brijesh Pandey. Discussions were held regarding innovative methods of teaching and learning with the students, teachers and instructors. A group discussion on National Integration was held and a few classes on several military subjects were also taken by the instructors and teachers.

NCC organizes many camps for the all -round development of cadets such as CATC, NIC, RDC and many more. Combined Annual Training Camp -71 was organized at RDBL, Nawabganj, Prayagraj by 6 UP (G) BN NCC from 05th August to 14th of August 2019. Many cadets participated in sports like kabaddi, volleyball etc. Some cadets became commanders and displayed marvelous leadership skills as Seniors. SUO Pooja Kumari became the Camp Senior of CATC-71 and UO Sandhya became the Company Commander in the same.

Cadets also attended the pre- TSC training that included health and hygiene, obstacle training, map- reading, judging distance, firing and tent- pitching. SGT. Shivani Pandey attended the IGC towards TSC in Bareilly and Trekking camp in Sikkim. Another cadet, SUO Pooja Kumari attended the Shooting Camp (IGC towards Mavalankar) in Fatehgarh and the SSB Capsules camp in Delhi Cantt which was a new initiative taken by NCC. 05 cadets participated in the Military Hospital Camp, New Cantt. Cadets also participated in CATC- 70 (organized by 16 UP BN NCC), CATC- 78 (organized by 15 UP BN NCC) and CATC 84 (organized by 2 UP Art Bty). Cadets and ANOs enthusiastically participated in all the camp activities.

Rank Ceremony is organized every year to with dedication and to award the work of cadets in various fields. Rank Ceremony was organized this year on the occasion of Kargil Diwas. Cadets who exhibited excellent leadership skills and performed well in every task were promoted to senior ranks. To follow the event, Guard of Honor was given to the Commanding Officer and several cultural programs were held. From university of Allahabad three cadets were promoted to senior ranks. The event was organized in the constituent college of University of Allahabad, i.e. in SSKDC.

With the increased level of pollution and Global Warming which is causing the depletion of Ozone layer, it has become the need of the time to heal the nature and fill back it’s reserves for the sake of future generation. Being the part of the largest youth organization, the NCC cadets have come forward to take responsibility and work devotedly towards the nature. Like the cleanliness drives they have also participated in the tree plantation drives. Many trees were planted in the University Campus in presence of some University Professors.

World Diabetes Day is celebrated on 14th of November every year. It is the primary global awareness campaign focusing On Diabetes mellitus. NCC cadets on this day take out rallies and carry out several awareness programs for the same amongst the locals. The cadets distributed pamphlets and leaflets to the locals and made them aware about the prevention of Diabetes by talking to them. Also they made the locals sign on a card taking the oath to stay healthy and follow every possible way of prevention. 06 cadets participated in the same.

NCC Day is celebrated every year on the fourth Sunday of the month November. The 71st rising day of NCC was celebrated by the 6 UP (G) BN NCC in the Battalion campus. Various events were organized during the celebration. 05 stalls were put by different colleges on the given topics to spread awareness regarding the NCC. The cadets of University of Allahabad had put the stall on the topic ‘Achievements of NCC’. Cultural events were also organized and cadets participated in it enthusiastically. Cultural events included dance, drama, singing, ballet and nukkad natak. A blood donation campaign was also held during the event. A lecture on importance of Blood donation was delivered by the head of the Lions Club. Speech by Brig. Brijesh Pandey boosted the morale of the cadets. To conduct this event and make it a success all the cadets worked hard in Unity and upholding Discipline, which is the motto of NCC. 33 cadets of AU participated.

Swachh Bharat Mission or Swachh Bharat Abhiyan is a nation-wide campaign in India that aims to clean up the streets, roads and infrastructure of India’s cities, towns, and rural areas. The objectives of Swachh Bharat include eliminating open defecation through the construction of household-owned and community- owned toilets and establishing an accountable mechanism of monitoring toilet use.

Under this Mission our cadets performed several activities including cleaning of parks, roads, statues, temples, University campus and their nearby living areas. Cleaning by cadets only cannot meet the objectives of this mission so involvement of people in mass was required and awareness about the importance of hygiene to health was to be realized by the public. So, the cadets of 6 UP (g) BN carried out the swachhta rally from Battalion to Chandra Shekhar Azad Park via Katra and made people aware about health and hygiene. They even cleaned the path of the rally and involved the locals too with consent. Nukkad natak were also enacted at various places amidst the rally. Cadets made the locals take oath for cleanliness by making sign on a poster on which the oath was written.

This cleaning program’s crucial purpose was not only to aware anyone as people are aware about the importance of cleanliness, but to implement the “walk the talk” strategy and it worked as people nearby voluntarily came forward to clean the roads and nearby areas which indicates success of the event. Thus this little program that was started with a few hands joined with many hands, ended by fulfilling the purpose of cleanliness. 20 Cadets from AU participated.

A successful attempt was made by the Delhi public school and SMPPS to establish a World record and register their names in Guinness book of world records for the title of Largest Science Practical lesson. The record was broken and the title was passed to DPS and SMPPS for setting up the new record with over 4000 students in one practical lesson. It also emphasized on the Importance informal science education and of water in everyday life. The NCC cadets played the role of Stewarts and witnessed the success of the event. The cadets helped in the management throughout the event. Several Cadets from AU participated in this event.

Every cadet has participated in one or the other activity along with the regular classes. The other activities that were held through out the year are International Yoga Day, parade and flag hoisting on Independence Day and Republic Day, Indira marathon and Guard of Honor to the Group Commander. Our cadets enthusiastically participated in welcoming one of the largest cycle rally at Prayagraj for cleanliness from Kolkata to Delhi. Cadets participated in the Group Best Cadet competition and SUO Pooja Kumari secured the 2nd position. NCC is giving children opportunity to grow in every field and cadets are actively availing them. 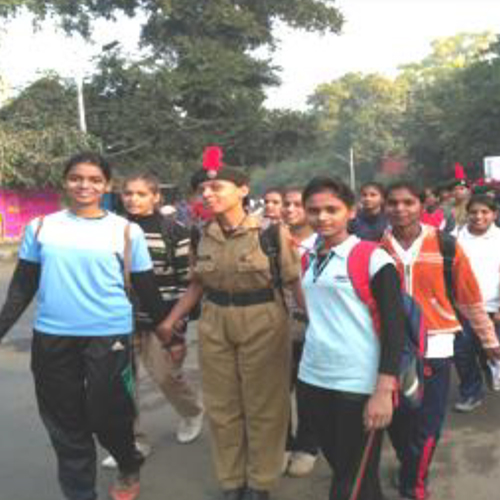 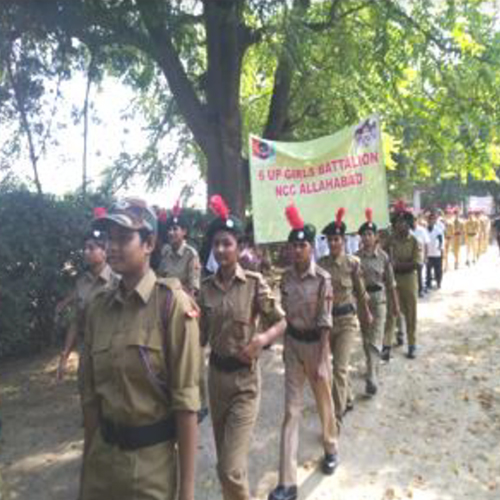 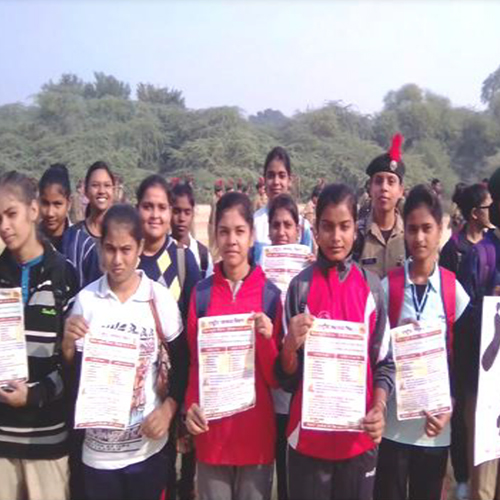 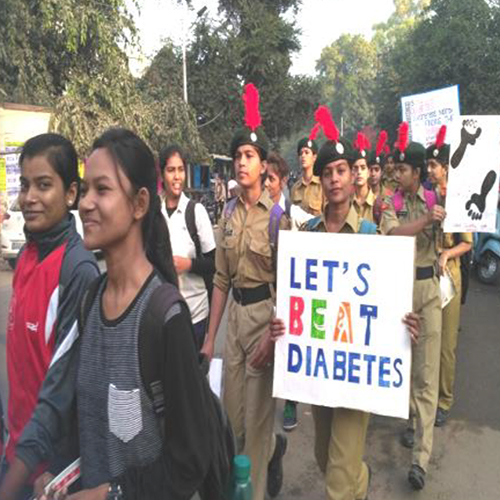 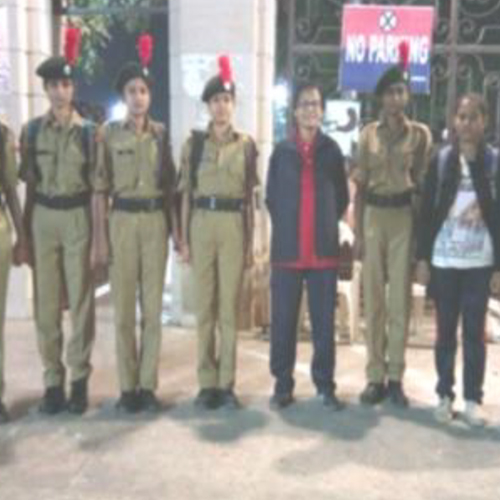 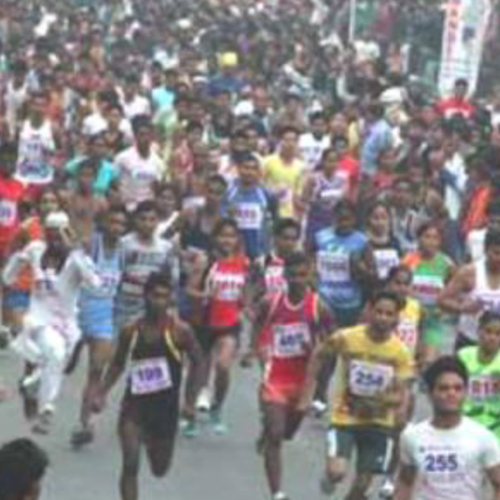 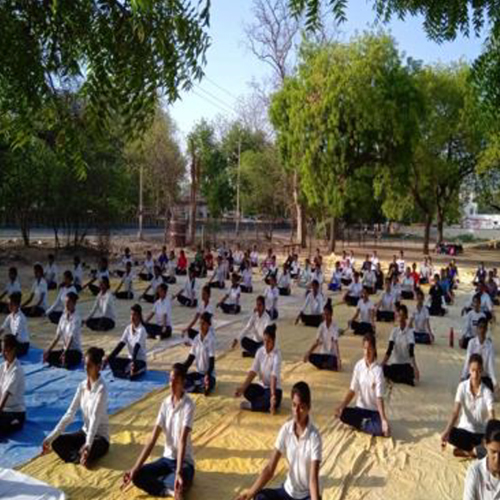 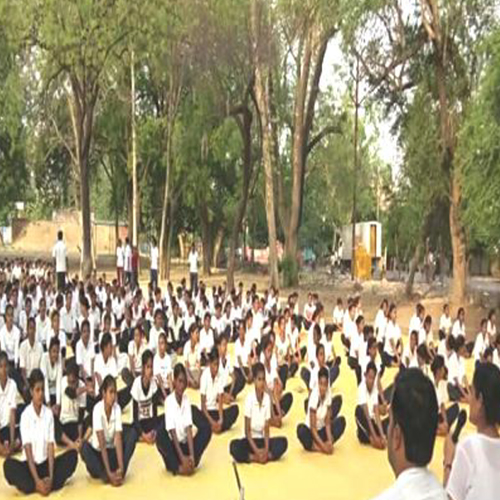 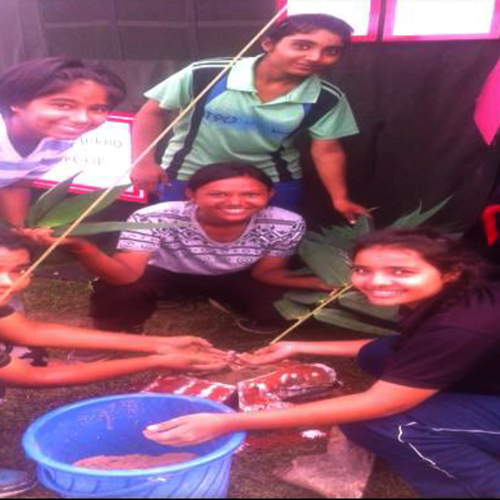 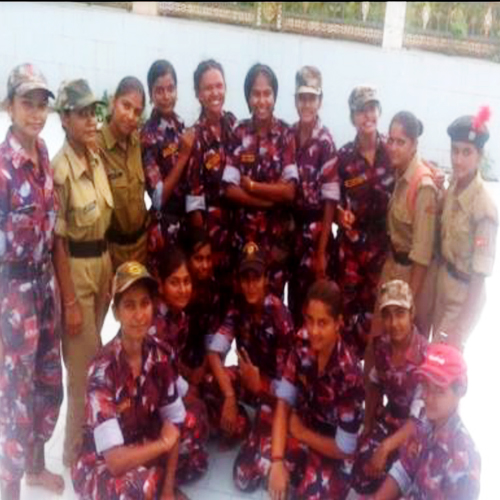 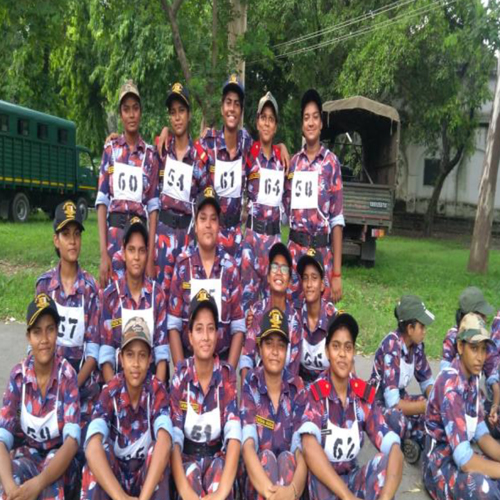 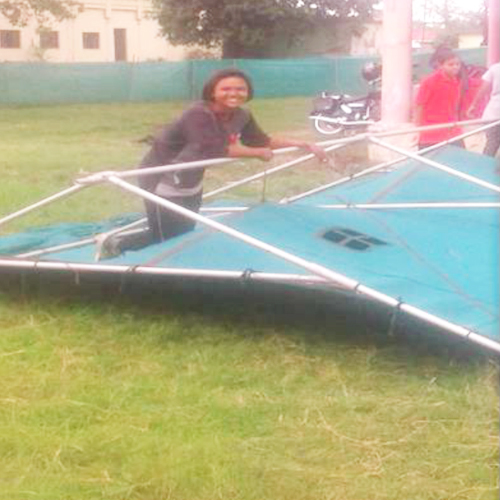 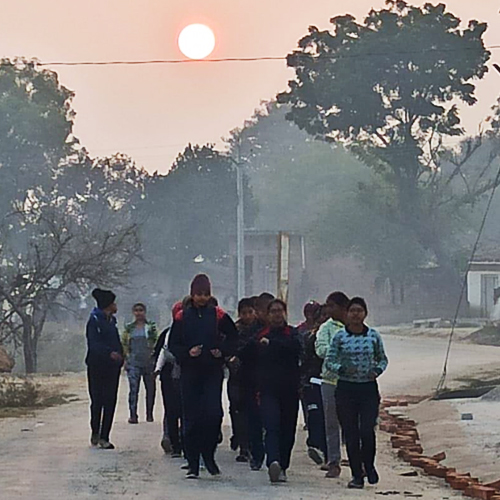 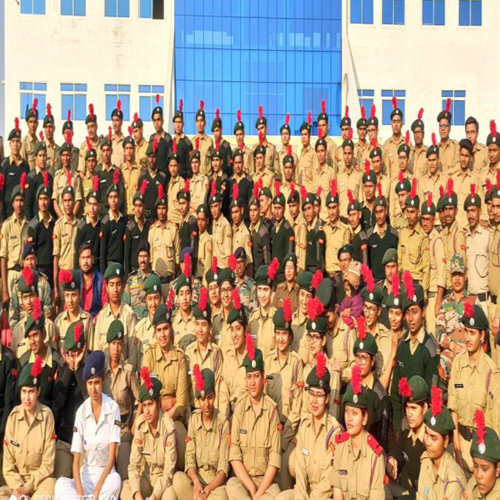 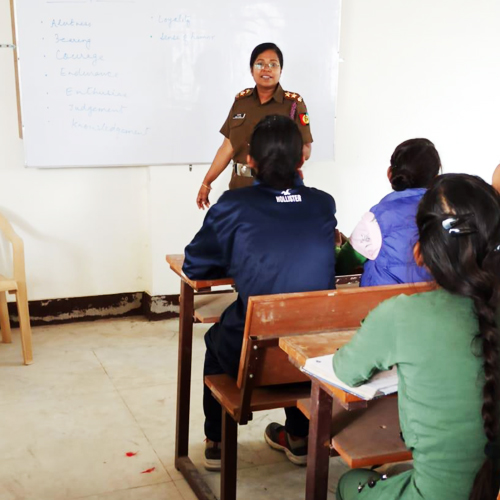 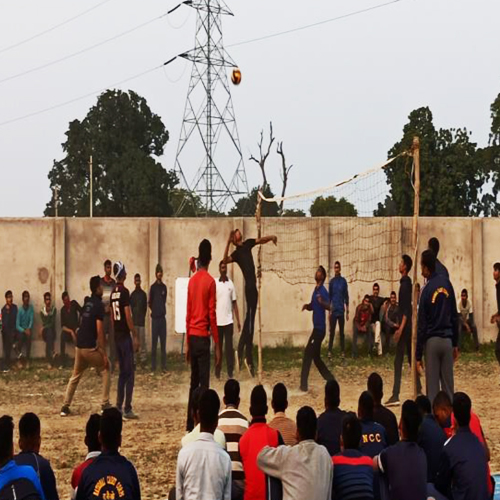